How does erection occur?

The penis is composed of the urinary pathway, called the urethra, and two elastic sleeves, called the corpora cavernosa, which are the structures responsible for erection. With respect to urination, urine is made in the kidneys and transported through tubes to be stored in the urinary bladder, which holds urine until full and then empties to the outside through the urethra.

On either side of the urethra, there are the paired elastic sleeves, the corpora cavernosa, which are filled with blood vessels and are responsible for the process of erection. Erection develops when blood flows into these elastic sleeves and is trapped there to produce the increase in penile length and rigidity associated with erection.

What causes Peyronie’s disease? How does it affect the penis? 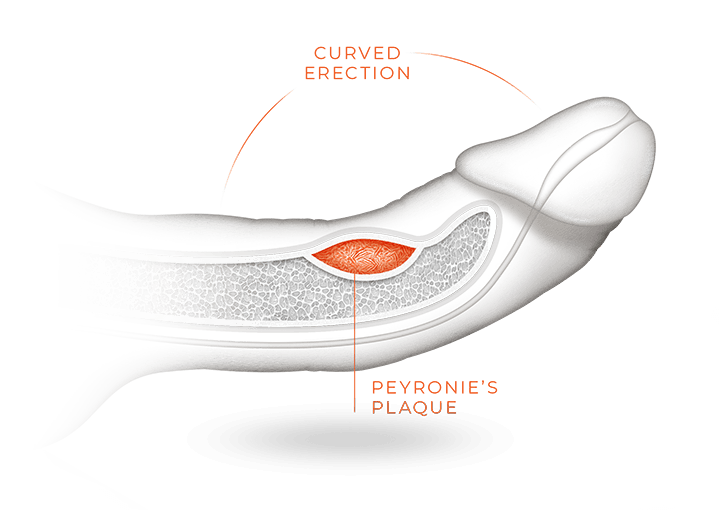 Peyronie’s may present in a variety of ways.

How is Peyronie’s diagnosed?

The diagnosis of Peyronie’s disease is based on the above symptoms. As noted above, sometimes a plaque can be felt with physical exam. Occasionally, an ultrasound may be done to see if the plaque can be visualized. If a man has inability to get an erection, a testosterone level may be checked, but otherwise there are not any blood tests that are typically needed.

How is Peyronie’s treated?

A variety of oral medications have been used to try to improve Peyronie’s. With the recognition that change in the elastic sleeve is caused by an inflammatory process, which in turn is triggered by chemical messages at the cellular level, different medications that can affect those cellular chemical response pathways have been used. Medications tried for Peyronie’s have included Vitamin E, Potaba (potassium aminobenzoate), and colchicine. Current studies suggest they may provide only limited benefit. Pentoxifylline (Trentral)may help in a subset of men.

The different pills available to help improve erection, Viagra, Cialis and Levitra, may work for some men. They can lead to a more rigid erection that is easier to get and maintain. However, with the increased blood flow, there may be more tethering of the area involved by the Peyronie’s disease which may cause more pain or curvature with erection.

Injections into the Peyronie’s plaque surgery

In addition to pills, other treatments have been developed that rely on direct injection of medication into the plaque itself. Different medications have been tied for direct penile injection, including Collagenase (Xiaflex), Verapamil, Nicardipine, and Interferon. Treatment schedules may require a dozen or more injections spread out at two- to three-week intervals. Investigational studies suggest there may be benefit for some patients.

Beyond drug therapy, other approaches have been explored to find improvement. Prior efforts have included the use of radiation therapy, and shockwave lithotripsy (a treatment also used for kidney stones), but they do not work. A penile traction device with weights (conceptually like the way traction is used to help with a bad back) may help some.

Surgery is used only as a last step. There is no substitute material to “patch” the elastic sleeve of the erectile body. Surgery is indicated when the degree of curvature is so severe that it is not possible to have intercourse. When surgery is carried out, the plaque is not excised. Rather, a “tuck” is made on the opposite side of the curve to make the penis straight.

In summary, Peyronie’s disease is a common condition. For peace of mind, men can be reassured that the “knot” or hard area they feel is not a growth or cancer. Some measures are available that may provide some benefit, but identification of a reliable remedy remains a work in progress.